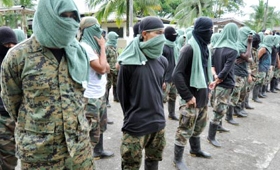 The US has given Colombia over $7 billion in mostly military assistance since 2000 as part of the plan. Much of this aid has gone to training, military hardware such as helicopter gunships and advanced intelligence gathering equipment. Colombia did its part by tripling its military budget, nearly doubling the size of its Armed Forces and professionalizing the Armed Forces. Another large portion of the US aid went to eradication efforts, while smaller portions have gone to social and economic programs.

The results have been equally mixed. The military and police have greatly increased their intelligence gathering capacity, and their ability to react quickly to this intelligence has led to the capture or death of numerous criminal leaders and insurgents, including three of the Revolutionary Armed Forces of Colombia (Fuerzas Armadas Revolucionarias de Colombia – FARC) rebels’ top commanders. The FARC, once an insurgency with close to 17,000 soldiers, is half that size today. The AUC demobilized under pressure from the government. The NVC self-destructed, and the ELN is nearly extinct. Production of coca, which is the raw material for cocaine, dropped as well, but other Andean nations have increased their output, offsetting these gains in Colombia. Kidnappings and homicide levels dropped steeply, but in a troubling sign, the national murder rate has begun to increase again.Plan Colombia continues to stir debate in Washington and elsewhere as policymakers and lawmakers struggle for a strategy to help Mexico and Central America contain the growing strength of criminal groups in the Isthmus. Many politicians, including Bill Clinton, have called for a “Plan Mexico,” and Secretary of State Hillary Clinton recently likened Mexico to Colombia, a comment that drew strong criticism from Mexican government officials. Policy wonks and non-governmental groups are weighing in as well, offering both criticisms and praise of the policy that promises to be at the heart of most any security strategy in the region for years to come.Resources