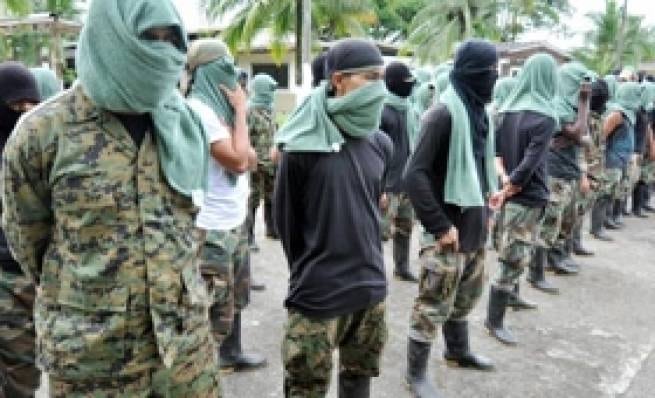 As the biggest irregular guerrilla army in Colombia, the Revolutionary Armed Forces of Colombia (FARC) operates in different regions of the country mainly in search for financial sources to fight their 40-year old war against the government and maintain their army. The FARC is the oldest and most important guerrilla group in Western Hemisphere. It has long financed its political and military battle against the Colombian government by kidnapping, extortion and participating on various levels in the drug trafficking business.

In spite of a concerted effort by the Colombian government, that included close to $8 billion in U.S. assistance over the last ten years, the rebel group still operates in 25 of 32 Colombian departments. Throughout the decades, the FARC has frequently adapted its tactics to survive, from its 1982 decision to begin taxing coca growers and cocaine laboratories, to its failed attempt at establishing a political party, the Patriotic Union (Unión Patriotica), in 1984. More recently, following the death in 2008 of its longtime spiritual and military commander, Pedro Antonio Marín, alias ‘Manuel Marulanda,’ the rebel group has begun moving towards building up its urban networks and increasing its political outreach, after the military defeats suffered during Álvaro Uribe’s presidency (2002-2010).

The FARC’s roots can be traced back to the rural violence that afflicted Colombia, following the assassination of populist leader of the Liberal Party, Jorge Eliécer Gaitán, on April 9, 1948, in Bogota. The assassination touched off a sectarian struggle, first in Bogota, and later in the countryside. The fight began as a battle between the country’s two chief parties, the Liberals and Conservatives. Entire villages were targeted for their political affiliations, among them the village of Ceilán, in the Valle del Cauca department, where the Liberal Party recruited young men like Pedro Antonio Marín, then alias ‘Tirofijo,’ to fight off the Conservative paramilitary onslaught. The violence, or what became known as ‘La Violencia,’ would leave close to 200,000 dead during the next 15 years. Hundreds of thousands more fled their hometowns to larger cities or more remote rural areas.

Among those who fled was a small faction under the control of the Communist Party of Colombia (Partido Comunista de Colombia – PCC). These colonists survived during their marches by organizing militias, or what were known as “self-defense” (autodefensas) units. The PCC ‘autodefensas’ were part of a larger Colombian communist strategy of “combining all forms of struggle,” which also included developing unions, student organizations and vying for political posts. The PCC’s unity and strategy attracted some members of the Liberal Party’s militias, among them Marín, who joined the party some time in the 1950s. The PCC’s rural factions were tiny but represented an ideological threat to the government, which launched an offensive against them in 1964 in their stronghold, the village of Marquetalia, Tolima. The offensive cleared the rebels out but provided the spark for the party to formalize its armed group: the Southern Tolima Bloc (Bloque Sur de Tolima).

The rebel group adopted the name Revolutionary Armed Forces of Colombia (Fuerzas Armadas Revolucionarias de Colombia – FARC) in 1966, and began a slow, steady rise. The growth of the illegal drug market helped. In the mid-1970s, the guerrillas changed their bylaws and began collecting taxes from the numerous marijuana growers in the south of the country. They later expanded that mandate to include the coca leaf plantations. During that same period the FARC began kidnapping en masse and extorting large and small businesses. In the early 1980s, the FARC began taxing cocaine laboratories that operated in their areas of influence.

The new revenue meant better equipment and more troops, but it also came with a very high cost. Large cocaine traffickers began balking at the “taxes”; they also bought land and began to exert influence on local politics. When leftist rebels from another guerrilla faction kidnapped the daughter of a large drug trafficking organization, several traffickers organized a paramilitary organization, Death to Kidnappers (Muerte a Secuestradores – MAS). Fighting between drug traffickers and the FARC also started over an alleged theft by the rebels of a large stash of cash in the Eastern Plains. Farmers, businessmen, and small shop owners also turned on the rebels because of the excessive extortion and kidnapping.

In 1984, the FARC tried another tactic and launched a political party while negotiating a peace settlement with the government. The Patriotic Union (Unión Patriotica – UP) was small but gained momentum as the country shifted to more local government control of funds and projects. In its first elections in 1986, the UP won several seats in congress and its presidential candidate garnered over 300,000 votes, a record for a leftist candidate. In the country’s first municipal elections in 1988, the party won 16 mayoral campaigns and another 247 city council posts. The reaction by the party’s opposition was swift. Paramilitary groups and drug traffickers, at times working closely with the Colombian government, assassinated UP members en masse. Over 3,000 were killed in a six-year period, and the FARC returned to the mountains where it continued its meteoric rise.

Indeed, the guerrillas’ growth during this period caused concern, and many questioned the FARC’s intentions vis-à-vis the UP, wondering whether the rebels had used the party as a means to strengthen itself militarily even while it negotiated peace and talked about turning in its weapons. Between 1984-1988, the years that the UP was the strongest, the FARC doubled the size of its forces. This growth was due to many factors, among them the attacks on the UP itself, which pushed many to give up on the democratic process, and the FARC’s strategy, which drew from the PCC’s idea of “combining all forms of struggle.”

The 1990s continued apace. After the government launched an aerial assault on the guerrillas’ headquarters in 1991, the FARC began spreading its forces throughout the countryside and developed more offensive tactics. In the mid-1990s, the rebels perpetrated a series of spectacular and debilitating assaults on government troops and battalions, leading the capture of hundreds of Colombian troops and policemen who quickly became bargaining chips in a new round of negotiations between the government and the FARC. Not long after a prisoner swap between the sides, the government ceded a massive territory in the southern provinces of Caquetá and Meta the size of Switzerland that opened the door to more peace talks.

The talks, however, were in trouble from the start when Marín, who had since taken on the former formal nom de guerre of Manuel Marulanda, did not appear at the inauguration. The years that followed included some advances but mostly difficulties. The FARC used the territory to regroup, recruit, train and launch attacks on nearby towns. When the army would give chase, the rebels would retreat into the zone. The FARC also kept kidnapping victims in the region and oversaw large coca plantations, the raw material used to make cocaine. In what many saw as the rebels’ real intentions, they built roads and tunnels, as if preparing for the type of prolonged war that Mao-tse-tung had used in China or the Vietcong had used in Vietnam.

In 2002, the talks ended when the FARC hijacked an airplane and landed it along a highway, before taking several passengers captive. Fighting broke out immediately as the government sought to retake the Switzerland-sized swath of land it had ceded for the negotiations. Shortly thereafter, the guerrillas kidnapped Green Party Presidential Candidate Íngrid Betancourt and her vice-presidential running mate, Clara Rojas. In February 2003, an airplane carrying four US government contractors and a Colombian pilot who were doing surveillance over the FARC-controlled region in the south crashed. Three of the U.S. contractors were taken captive.

These events coincided with the arrival of President Álvaro Uribe in 2002, who, as opposed to his predecessor Andrés Pastrana, had campaigned on a war platform. The FARC greeted him by launching mortars at the presidential palace during the August 7, 2002, inauguration.

Undeterred, Uribe reinforced the army, strengthened police intelligence, placed security forces in nearly every municipality and created incentive programs for the rebels to turn themselves into authorities. This effort got a boost from the US, which had begun an ambitious assistance program it had labeled “Plan Colombia,” in 2000. Following the kidnapping of the three US contractors, the US intelligence services upped their training, equipment and assistance to the Colombians, accelerating an already fast-track professionalization program.

The results have been historic and have had a powerful cumulative effect that has transformed Colombia. Thousands of guerrillas have voluntarily demobilized, weakening the FARC and strengthening the state’s intelligence on the rebels. In September 2007, in what was perhaps the first big blow against the group, the Colombian Air Force bombed a FARC camp in eastern department of Guaviare, killing the rebel leader Tomás Medina Caracas, alias ‘Negro Acacio.’ In March 2008, the government bombed a FARC camp located near the Putumayo river, a couple of kilometers inside Ecuador, killing Luis Edgar Devia Silva, alias ‘Raul Reyes’ and several other guerrillas. That same month, Manuel Marulanda died of natural causes. The new leadership of the FARC, Guillermo León Sáenz Vargas, alias ‘Alfonso Cano,’ and Víctor Julio Suárez, alias ‘Mono Jojoy,’ had been trying to implement a new strategy, but government forces’ constant offensives have strangled these two leaders. Suárez was killed in September 2010, and several other FARC leaders have taken refuge in Venezuela and other neighboring states.

Still, the FARC is not finished. The rebel group has several thousand troops and continues to draw strength from government economic policies that have widened the divide between rich and poor in this country. The FARC also still operates in coca-growing areas, from which it can draw tremendous revenue and even dabble in the trade of the processed-cocaine itself, which the guerrillas are increasingly doing.

The FARC is a complex group with a well defined organizational structure and line of command. It’s organizational structure has evolved throughout the years as a result of a process of adaptation to the main challenges of the internal conflict. Ostensibly hierarchical, the geography and size of Colombia has made it nearly impossible for the central command, known as the Secretariat, to exercise control over the pieces, which are broken up into Fronts, with the exception of various special forces units that tend to roam where they are most needed or where they are doing a special operation. In the cities, the FARC manages militia groups. Throughout they have a vast support network full of logistical experts in bombing, transportation, kidnapping, arms trafficking, food storage, etc. The relative autonomy of the Fronts can make them lethal criminal organizations. Indeed, the Fronts, of which there are over 70, have incentive to thieve, kidnap, extort and plunder since their growth depends, in part, on their financial return.

On the political front, the FARC is connected to the Communist Party of Colombia (Partido Comunista de Colombia – PCC). Each unit has a political operative and each soldier has political as well as military duties. These include paying attention to and analyzing the daily news and spreading the gospel of the FARC to family and friends. For all intents and purposes, the FARC has broken from the PCC and, after their public political project, the UP, failed, they are running two clandestine structures, the Bolivarian Movement and the Clandestine Communist Party of Colombia.

In the end, there is much discussion about whether this structure and modus operandi constitute a ‘cartel’ or a criminal organization. While it is true that parts of the FARC traffic in illegal drugs in increasing quantities, kidnap and extort, and partake in other criminal activities that undermine their mission, their general structure, recruitment, modus operandi and their purpose remain centered in the political rather than the financial returns, making it hard for InSight to say they are simply a criminal enterprise.